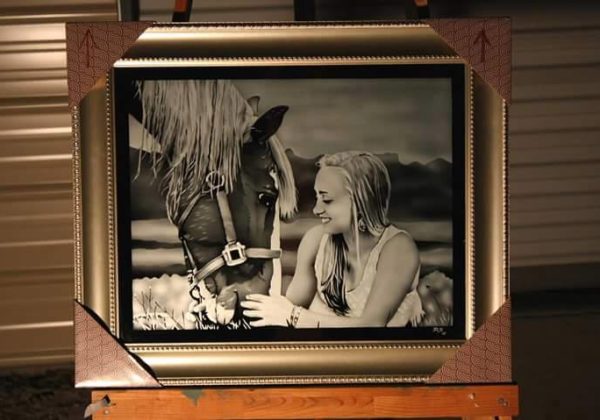 What is glass etching?

Glass etching is a form of art that removes the surface layer of glass, or mirror, leaving behind a cloudy finish. There are many ways to etch glass, but only a micro abrasive sand blaster can produce the amount of detail and true depth as seen in the pictures above.

How do you use a micro abrasive sand blaster?

Using a sand blaster for glass etching is a lot like painting, but reversed. Instead of adding shading and color to a white canvas, you’re working to remove the object from a black canvas by adding shades of white. With painting, you can always add more paint if you’re unhappy with the result, but with glass etching you only get one try to make it right. Depending on the detail, each piece can take around 30 hours to complete.

Who is David Schulte?

Located in Jacksonville, FL, David Schulte is an artistic glass etcher specializing in portrait recreation. He got his first glimpse of glass etching in the early 80s at a motorcycle show. A guy was etching images into a windshield with a high-speed rotary engraver and Dave thought, “Hey, I can do that.” Dave has been glass etching ever since and 30 years later has truly mastered the trade. Although Dave started with a Dremel tool, he switched to a micro abrasive sand blaster shortly after. All of the pieces above were created by Dave with a micro abrasive sand blaster.

Having completed over 200 pieces for friends and family, Dave is happy that his hobby can bring sentimental joy and happiness to others. One of his favorites, Lucky Dog, was created for a friend in remembrance of their family dog who died from a rattlesnake bite.

What is Dave’s technique?

To start a project, Dave will cover the entire portrait with a thin masking material, typically vinyl, and place it on the glass as seen below. He will then use an exacto knife to cut out the entire image, this takes the most amount of time.

Dave then begins blasting by adjusting the distance and angle of the tip to get a desired finish. There are numerous combinations of tips, abrasives, and pressures one can use for glass etching but here’s what Dave has found to be the best:

Here’s a picture of Dave working his way down Lucky’s face.

After 30 hours of patience and skill….

Which micro abrasive sandblaster does Dave use?

The Vaniman Mobile Problast – Glass Etcher with a 50-100 micron tank and a small yellow carbide tip.

Dave typically does his glass etching outdoors, but he recently built an enclosure for blasting indoors: